4-Cycle vs 2-Cycle Weed Eaters – Which is Better?

Having the right tools when gardening is essential. Weed eaters have made life a lot simpler, but it seems that the struggle continues in some sense. Manufacturers have always searched for ways to improve their models, so consumers have the options of choosing between 2 and 4-cycle weed eaters.

Which one is better? How are they different? What should I go for? These are the typical questions you might ask yourself.  There are a few differences between a 4-cycle and a 2-cycle weed eater, and they impact your budget, time and energy. To make your decision between the two easier, we distinguished how a 2-cycle is different from a 4-cycle weed eater.

Before upgrades, 4-cycle weed eaters used to be quite bulky, making it arduous for many people to work with it for a prolonged period. The other problem was that they were also noisy. Advancement in technology resulted in this trimmer becoming not only lighter, but also much quieter. That made it more pleasant for people to use it and even neighbors appreciated that it didn’t disturb them like the old models.

Some states in America have implemented CARB compliant regulations, so that has resulted in 4-cycle weed eaters having a less exhaust and polluting the air. Not only is that better for the environment but also for the user who will inhale less black fog.

One of the reasons 4-cycle weed eaters are more convenient than 2-cycle ones is that they tend to fire upon the first pull due to requiring less priming for the gas and oil to mix. Too much or too little gas/oil mix can adversely affect the engine and result in it breaking. Getting the right mix isn’t necessary with a 4-cycle weed eater.

Another difference between the two weed eaters is that a 4-cycle weed eater provides more torque, the force that spins an object around an axis. A 2-cycle weed eater runs on more power by operating at higher RPM, but a 4-cycle engine accomplishes that through greater torque.

A 2-cycle engine reduces the number of strokes in half, and it does so by combining ignition and combustion on the upstroke, then combining exhaust and power on the downstroke. On the first stroke, the piston moves up, then draws in the fuel and compresses it. On the downstroke, it ignites the fuel, pushes the piston down and expels it out of the exhaust.

A 2-cycle weed eater with the same engine size and specifications will produce double the power strokes of a 4-cycle engine, resulting in you getting more trimming power. Keep in mind that 2-cycle weed eaters that require larger cylinders and pistons tend to lose their inefficiency.

Your budget is a major consideration, and if you want to go for the weed eater that’s more affordable, then the 2-cycle one would be your pick. One of the reasons that they are cheaper is because 4-cycle weed eaters have more parts, therefore require additional work and complexity. 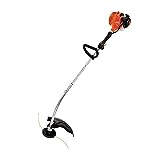 Other Factors to Consider

Regarding maintenance, you’ll have to change the oil on the 4-cycle weed eater, and it’s got more parts that can break than on the 2-cycle. A 2-cycle weed eater requires oil to be mixed with gas to ensure that the gas/oil mix is always right so that you don’t have problems with the engine. Keep in mind that you have to keep some 4-cycle models leveled so that the oil can constantly lubricate the engine. When you tilt a 4-cycle weed eater for prolonged periods, you run the risk of uneven oil distribution, which can cause engine damage.

RELATED READING: Electric vs Gas Weed Eater – Which is Best for You?

You’ll need to weigh the various aspects when choosing between a 4-cycle and a 2-cycle weed eater. Both have their benefits and setbacks, but it depends on what you’re prepared to tolerate in order to enjoy a certain perk. The 2-cycle weed eater is cheaper because it has fewer parts, but it’s also not as powerful as a 4-cycle weed eater. You need to decide what’s more important to you.

Parts of a Drill (Explained with Pictures)

The drill is a great tool for any homeowner to consider acquiring. You can use them for anything from hanging up a picture to redoing