A casual glance at the specifications of these two kits by DeWalt might convince the observer that they are identical. And, when it comes to the impact driver included, they are right. DeWalt bundles their compact ¼” impact driver, model DCF885, into both kits. You need to dig deeper into the drill/driver specs to see what differentiates the two.

What does this mean to potential buyers? Just this, when it comes to power and runtime in battery tools, more volts paired with more Ah equals longer run times and more power. Since the tool combos are essentially the same, users wanting a little more oomph in their drill will gravitate to the DCK280C2. But, and while we hate to say it, more power isn’t always better.

Time to compare the differences between these two DeWalt combination kits so you can judge for yourself which best fits your needs.

Since performance is the area with the most differences, let’s tackle that first. The DCK240C2 drill/driver is powered by a 20V Max lithium-ion, 1.3 Ah battery that produces 300 unit watts out (UWO), a measure of power when driving screws and drilling holes. It has a ½’ chuck with 16 clutch settings and two transmission settings (0-450 / 0-1500 RPM).

Price – It’s a tie if you shop carefully

Savvy shoppers can hunt for deals online and in stores and generally find both kits for about the same price. You are a savvy shopper, right?

The tools in both kits feel rugged and more substantial when compared to other name brands. They look good regarding fit and finish and reflect the DeWalt reputation for building tools that will handle tough conditions. 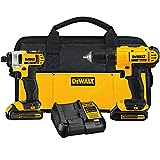 What review is complete without a few pros and cons? We won’t disappoint you, pointing out a few before getting into what users have said about each kit. 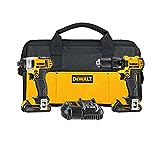 Next up, the rival.

This review is like comparing and contrasting identical twins! But, our research points out what people who know twins already understand, beneath the visual similarities there are differences. Let’s peel back the cover and see what users say after putting their choice between the two kits to work.

Before we get going, a couple of quick notes:

Users report being pleased with the performance of both kits. There are few complaints posted when it comes to the impact driver. People love the power and compact size. For removing rusted lug nuts and stubborn bolts, an impact driver is the tool to use.

The value of the kit comes up frequently as does the ease with which users can handle the tools due to their ergonomic design. They are light and nicely balanced.

Users appreciate the LED work light on both the drill driver and impact driver. A work light is a huge bonus when working in dark spaces.

The issues with both kits involve the batteries, the chuck, and the motor. Battery issues seem especially prevalent with the DCK280C2. Users are dissatisfied with a variety of factors; failure to charge, very poor runtime, and dead batteries. Given the cost of batteries relative to the tool they power, replacement outside of warranty can cost more than the tool itself.

The chuck also ranks low, especially with the DCK280C2. For this tool, users report significant wobble meaning that with a bit installed, and the tool running, there is a visible wobble in the bit. A serious negative! For users of the DCK240C2, their chuck issues concern the inability to tighten it completely resulting in bits coming loose and falling out in use.

Users of both tools report electrical burning smells right out of the box and showers of sparks in some instances. A little smell is not uncommon in new tools but strong, continuing burning smells are a sign of problems.

Finally, on the negative side, users report poor experiences when dealing with DeWalt’s customer service. Reports of agents with no product or warranty knowledge come up as well as indifference concerning the problems the customer is having.

Picking a winner was tough. Fortunately, our research gives us enough information to make a definite recommendation, buy the DCK240C2. While less powerful, users report fewer issues relating to batteries, the chuck, and the motor. Perhaps the greater power of the DCK280C2 is creating the issues of its user’s report.

The DCK240C2 is going to provide homeowners, DIYers, and light commercial users with two tools that will serve their needs reliably for years to come.