Best for the Money

In this comparison, we pit the DeWalt DW734 against the DW735. While similar in many respects, some differences make one a better choice than the other, depending upon your needs.

Both will serve the DIY/home woodworkers and small professional users well. Both are billed as portable, but the user manual recommends two people transport the tool. Hum, that’s portable? The DW734 is a few pounds lighter and offers a respectable feed rate of 24 feet per minute.

The DW735 has the benefit of slightly wider stock capacity, better controls, and dual speed selectivity. Either will handle the job of planing and reducing thickness in a non-production (commercial) environment. Read on to see where they differ, and which is better for your needs.

What are the differences between them?

Your author enjoys writing these reviews from the perspective of a sports competition. Personal preference for sure, but it makes picking the winner more fun! With that bit of background in mind, today we have the DeWalt DW734 thickness planer at center ice against the DW735.

Performance – Goal to the DW735

When judging power tools, the capacity to perform work and get the job done is top of the list. In the case of a thickness planer, you want to consider stock thickness and width, feed rate, depth of cut, and the horsepower of the motor. Both planers come with powerful 120 VAC, 15 A, belt drive motors. Both can handle stock up to 6” thick. The DW735 scores the first goal against the stubborn DW734 defense because it handles wider stock (13” vs. 12.5”) and offers two material feed rates (14 and 26 feet per minute), an especially nice feature when dealing with harder and rougher stock.

For a planer with fewer features than the competition, you expect to pay less, and the DW734 comes away with the goal for this reason. It is considerably less than the DW735. Based on your needs, money may be the determining factor for you. The DW734 take this goal with its lower price tag.

Durability – Goal to the DW735

Looking at the two planers, the DW735 exudes that beefiness that is essential in a tool designed to reduce stock thickness. Planing is a high-speed (10,000 RPM) job and generates a lot of vibration. In this case, the brawnier front line of the DW735 (92 pounds) with its substantial cast aluminum base brushes aside the lighter defense of the DW734 (80 pounds) for the second goal of the contest.

The DW735 comes away with a hat trick and the win because of its overall superior design. Easier to read depth gauge, large depth adjustment handle, two extraction hoods – one for dust and another fan-assisted for chips, and automatic carriage lock for additional safety. And, the win goes to the DW735

Quick Rundown of the DW734: 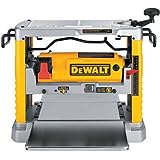 The DW734 is a great tool for the home workshop in need of occasional thickness planing. It is affordable, capable, and provides the capabilities required for planing stock when the project requires it. For professionals who need a tool they can take to a job site on occasion to handle planing needs, it is also worth considering.

Quick Rundown of the DW735: 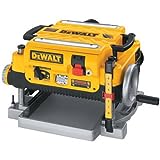 This planer is an excellent choice for the professional contractor and woodworker who uses rough sawn stock or needs to plane stock to meet a thickness specification frequently. It is a more substantial, more robust tool that will serve those needs well. It is not a tool for a commercial operation aside from filling the need for occasional planing in support of larger, commercial tools.

Let’s step out and see what the users of each planer have to say after putting their choice to work on their projects. We gather our “intel” by scouring around the internet and reading reviews from actual, non-company people. We’ll highlight the good and bad experiences for you.

First up, the DW734. Perhaps the most common observation is the users love the beautiful finish the DW734 produces. The tool uses three knives and planes stock at 96 cuts per inch. They also report success with a wide range of stock from pine to oak. The planer appears to be easy to set up and operate by all accounts. The bottom line is the DW734 is doing the job that the people purchased it to do.

Negative experiences do crop up. Dust collection being poor ranks up there. But it is rare that any tool with a dust collection feature performs as well as hoped. It appears that useful dust collection is about as easy to produce and kitchen table cold fusion. There are some other nits people pick such as the infeed and outfeed tables being out of level and the bolt for the crank handle is a bit too short. Some users report needing to make more passes compared to other planers they have used to achieve a given thickness when working with especially hard species of wood. Nothing is a deal breaker for most users.

Next, let’s look at the DW735. The beautiful finish ranks near the top for the DW735 as well. No surprise since this model can produce 179 cuts per inch. They like the build of the tool and how the controls work. The dual speeds are also useful when planing different types of wood,

There seem to be more frustrations with the DW735 than with the DW734. Snipe is a recurring complaint. Snipe can occur on the leading and trailing ends of the stock and is a variation in thickness resulting from the stock not being absolutely level throughout the entire process. Dissatisfaction with the durability of the blades and their replacement cost comes up as well. Third party alternatives are mentioned as a solution. Finally, our old friend dust collection crops up. In the most detailed analysis of the issue, a user states that you need to follow the DeWalt instructions about not using a shop vac for dust collection. It just can’t keep up and continually blows the hose off. Another user comments that his purpose-built vacuum system works well.

The bottom line for your decision may come down to price and frequency of use. The DW734 is less expensive and, if you don’t regularly need to plane large stock for smoothness and thickness, it will do the job quite well. It seems an excellent choice for the weekend DIYer and professional carpenter.

On the other hand, if your work requires regular planing of a wide variety of stock, especially rough sawn hardwoods, then the DW735 is a better choice. It can produce much smoother finishes, has a more robust build, and better controls. For the contractor or advanced DIYer, the DW735 might be your planer of choice.

Even though the DW735 took the contest on goals, both are capable tools. Neither is a bad choice when correctly matched to your needs.