Both the Dremel 200 and Dremel 3000 are corded rotary tools with multiple speed settings. As members of the Dremel rotary tool universe, they can accommodate a vast array of bits and accessories, making both super-functional, multi-faceted tools. And both are aimed at the same audience – homeowners, crafters, and dog owners. Short of cooking dinner for your in-laws, both tools can handle just about any task you can think of.

We like them both – and both are super-popular with users – but we like the 3000 series better. It contains two key advances – variable speed and toolless accessory changing – while remaining at almost the same price point. Since there is no counter-argument to be made for the 200, we recommend the 3000 series.

Both tools offer more than one speed. But the 200 series offers only two pre-set speeds – 15,000 or 35,000 rpms. The 3000 series allows you to gradually move up and down from 5,000 to 35,000 rpms. Clearly, the 3000 series offers you a much greater variety of speed choices. The 200 series has a small but noticeable number of reviewers unhappy with these pre-set speeds. Also, keep in mind that there are a few accessories that are designed to be operated a very slow rpms which the 200s cannot accommodate.

Tooled or toolless accessory changing – another win for the 3000

Quick Rundown of the Dremel 200: 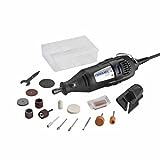 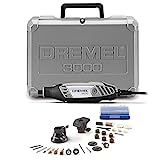 Dremel’s 200 series and 3000 series are both going to conquer a wide spectrum of jobs – cutting, sanding, cleaning, engraving, polishing, grinding, carving, and more. There’s nothing wrong with the 200 series, it’s just that the 3000s are a modernized version with extra and valuable features. Dremel even describes the 3000 as a tool designed based on user feedback – and who doesn’t want to hear that?

Let’s let the 200 series go blissfully into a well-earned retirement and forge ahead into the future with the 3000 series.

Band Saw vs Table Saw: Which One to Choose?

If you’re in the market for a new saw but don’t know which kind of saw will best fit your needs, you’ve come to the

Ryobi P105 vs P108 Lithium Batteries: Which One’s Right for Your Needs?