When you’re faced with the decision, it can difficult to choose which tool is right for you, especially when all models have positive and negative elements. Neither model has a better speed or RPM level, but the Dremel 3000 model doesn’t cope with pressure as well as the 4000 model does. They’re similar in many ways with only their price and some features differing. It’s still worth seeing which one is best for you as you may be suited to the one you wouldn’t have gone for. If you’re looking for a tool that can do the job efficiently for a less high price, then the Dremel 3000 model is your ideal tool. Those who want a professional finish but don’t mind paying a little more should look into getting the Dremel 4000 model.

Regarding popularity, speed, and precision, the Dremel 4000 wins. If you wantDremel 3000 model to do much sanding, then the 3000 is just as capable as its counterpart. These two models are ideal for both the craftsman at home or those who do several jobs around their house, but neither would suit a professional as they’re not durable enough. Unlike the 3000 model, the 4000 includes the electronic feedback feature which allows the motor to adapt to how it is being used which is particularly useful for some users.

Despite this, both models are very similar. And,  it depends mostly on what jobs you’re going to do with it on which one you should choose. The 4000 model may be better for users who review the product online. But it’s mainly down to personal experience, and you may find you like the 3000 model better.

Both motors on the 3000 and the 4000 models have a similar speed range. They start at 5,000, with the 3000-model ranging up to 32,000 RPM and the 4000 model to 35,000 RPM. However, the 3000 only has 3-speed variations whereas the electronic feedback feature on the 4000 model allows the speed to vary according to the job it is completing. This ultimately means that the 4000 model will give you better control and precision over the job, whether that is polishing, cutting, or sanding. Concerning performance, the 3000 model doesn’t live up to expectations and users rate the 4000 model better for everything other than sanding. When looking at the sanding ability, the 3000 model wins.

Despite only having minimal differences in the toolkits, the price of these two models does vary a lot. The Dremel 4000 is more expensive than the 3000 model. But, this is because it includes a lot more extra features and is generally a better rotary tool. Users have expressed that the Dremel 4000 is more expensive than other models (particularly the 3000). However, it is worth paying more money to have a good quality tool that will last a long time. The 3000 model is durable and does work well but just not as well as the 4000 model. However, both models live up to their price. If you’re looking for a more budget style tool, then the 3000 model will be better suited to you than its more expensive counterpart, the 4000 model.

The 4000 model wins the durability competition, without a doubt. It’s a lot more durable to drops and accidents so you can be sure that if you invest in this model, you have a tool for life. The 3000 model is a little less durable as it comes with plastic attachments that don’t tend to last as long as those supplied with the Dremel 4000 model.

The 3000 and 4000 models are designed with the user in mind, they’re ergonomically designed and sleek meaning you should be able to use them for an extended period without any issues. There is only one main difference between the design of these two models and it’s that one is darker in color than the other. This doesn’t affect the usability of it, but they can be easily identified as different. Both models are also corded which is a negative aspect of both as there are some powerful rotary tools by Dremel that are cordless and work great too. 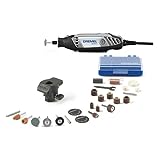 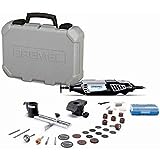 We went ahead and researched what other users have to say about these products. After reading several reviews from previous users and paying attention to forums, we have gathered information on what people generally think of both the 3000 and 4000 model.

Users state that the Dremel 3000 is excellent value for money and worth investing your money in if you’re a beginner and you have nothing to compare it too. However, they also state that if you’ve used a rotary tool before or you have experience with Dremel, then the 4000 model may be better to purchase. Users tend to choose the 4000 model over the 3000 as it’s less expensive and still good quality. The 3000 model doesn’t last as long as some users would like it too and therefore they tend to opt to spend a little more and purchase the Dremel 4000 toolkit.

It has also become clear that the Dremel 3000 toolkit doesn’t have as many accessories as the 4000 model. This is because the 4000 series by Dremel is a better and newer edition to the 3000 series. The more tools that Dremel has created, the more attachments they have been able to offer to their customers. This is another substantial positive of getting the Dremel 4000 toolkit over the 3000 model.

The consensus is that the Dremel 4000 is a better model than the Dremel 3000 because it’s good quality for the money. It’s also more comfortable to hold and designed better than the 3000 model.

The clear winner out of the two has got to be the Dremel 4000 toolkit. However, both kits appeal to a range of users. Those who wish to save some money may choose the 3000 toolkits as it does lack specific features and attachments but it is still a great tool to use. Both tools are ideal for those working on aspects of their home or crafts. They’re both excellent value for money too. It’s mainly down to personal preference as you will only want a tool that suits the job you need to do.