The Fluke 115 and the Fluke 117 both come from Fluke’s 110 tool line. That means both are very much related to one another. The Fluke 115 is a great basic electrical digital multimeter, while the 117 is a more advanced model that delivers some extra features for—you guessed it—a little more money. Because neither tests amperage in the milliamps or microamps range, neither is suitable for electronics work.

The difference comes down to cost versus features. Both have the same basic construction, the same operating ranges, and the same identical testing ranges. The 115 is cheaper. The 117 can detect current without touching it to wires; it can discern the difference between spurious current (so-called ghost signals) and live current. That’s important if you need to tell whether a line that’s supposed to be dead is actually live or if you’ve got impedance bleed-through.

If you’re looking for a multimeter to do basic electrical work, the Fluke 115 is perfectly fine for that. It’ll do everything you need it for, and it costs less than the 117. If you need the extra features that come with the 117, the additional few bucks are worth the investment. That might sound like a bit of a cop-out, but it’s just the simple truth.

What are the differences between them?

Both multimeters are basically the same, with some additional features that make the 117’s performance slightly better. It can detect voltage in a circuit without touching leads to it, which makes that part of your job faster, safer, and more efficient. It can also tell if that current you’re detecting in a supposedly dead line is a consistent spurious current. By that very fact, the 117 performs better.

Because the 115 and 117 have basically the same build, comparison shopping is very straightforward. The 115 is always going to be cheaper than the 117. It just doesn’t come with a few of the 117’s features. The trick is determining whether or not you need to pay the modest markup price for the 117’s additional features.

The Fluke brand name is associated with accuracy and durability. You pay extra for reassurance that the multimeter won’t stop working because it fell to the ground from your workbench. Furthermore, Fluke meters are all individually tested to make sure they can operate to their listed safe ranges.

Both the 115 and 117 hail from Fluke’s 110 line, so both feature identical design and construction. They have identical testing ranges and identical ranges in operational temperature. Both are also rated to operate safely with voltages of 600 or lower. Because of all that, it’s a wash when it comes to durability. 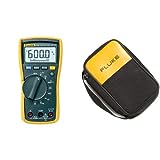 Instead of a side-by-side comparison, you’d prefer a slightly more abstract approach to judging these models of multimeters. You don’t want to go with which one is better than the other, but the experiences other users have had. That way, you know something about the model of Fluke you want to buy beyond how it stacked up to a slightly different model—a sound approach that we endorse.

Generally speaking, anything with the Fluke name is going to rate highly in customer experiences. Fluke products all do well in customer reviews because Fluke puts real muscle into its products. Fluke meters are accurate, reliable, and durable. And you will pay for that reputation.

Users liked the 115 as a basic, bare-bones electrical multimeter. It was accurate, handy, and great as either a standalone multimeter or as a supplemental part of an electrician’s inventory. Some people had difficulty seeing the display and some people found it a little limiting, but overall people really like using it.

The 117 shows the same basic reaction. Some people really liked the additional features, and most everyone found it to be durable and accurate. A few people disliked the display, and since there were similar complaints about the 115, this suggests that the problem is related to the entire line of meters rather than individual models.

The general consensus was that the 115 is a great basic multimeter for everyone, but that the 117 was generally geared more toward professionals for whom the additional no-contact alert and ghost signal discernment features are intended. Both meters were otherwise very popular because both are accurate and durable. However, be prepared to pay for the good Fluke name.

Choosing between a Fluke 115 and a 117 is a simple matter of asking whether or not you require the two features that will cost extra: the 117’s Voltage Alert feature and the feature that discerns ghost signals from live lines. That is the only thing that separates these two models. If you don’t need a no-contact voltage alert and don’t have much need to worry about spurious current, then you can pay a little less and get Fluke’s great reputation for dependability, accuracy, and durability. If you need those features, then the cost isn’t so great that you’ll have to sell plasma to pay for them.