Miter Saw vs Circular Saw: Which is Best for Your Needs?

If you build a lot of woodworking projects from plans written by other people, you might have noticed that miter saws and circular saws are often used interchangeably in tool lists. “Circular saw or miter saw,” “we used a miter saw, but a circular saw would also work…”

And so on. It’s easy to draw the conclusion that these two tools are completely interchangeable, and you’ll never need more than one of them in your workshop at a time.

We here at HealthyHandyman don’t think that’s true. By assuming that miter saws and circular saws are identical, you miss out on a lot of the specialized abilities of each one. In this article, we’ll lay out the similarities and differences between these two super-powered woodworking tools, and help you decide which one is best for your needs. 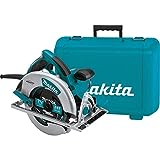 Origins of the Miter Saw

In 1964, Rockwell engineer Ed Niehaus had the idea to combine a circular saw with a miter box. He mounted the circular saw on a hinged arm, developing a method of clamping a workpiece in place and using the power saw to crosscut or miter it near-instantly. His design was a hit, and when Rockwell failed to patent it, every other tool company rushed their own miter saw to production.

Fifty years later, miter saws are here to stay. They’re precise, user-friendly tools that can anchor any workshop. But what pros and cons make them different from circular saws?

Miter saws are far more precise than circular saws, and they’re also easier to use. With a handheld circular saw, you need to line the blade up just right, hold it to a steady course, and attend to a lot of safety features. Miter saws get you more precise edges with less risk of injury.

Miter saws are not portable. Wherever it is in your workshop is where it stays. A lot like a bandsaw is to a jigsaw, a miter saw offers more precision than a circular saw at the cost of portability.

Not as Versatile as a Circular Saw

Miter saws are also less versatile. The four kinds of cuts they can make are all they can do. Finally, miter saws also tend to be a lot more expensive than circular saws (see our desktop vs. laptop or bandsaw vs. jigsaw analogies).

The Four Types of Miter Cuts

SEE ALSO: Our reviews of the best miter saws in 2020

This video is highly recommended for understanding miter cuts.

Origins of the Circular Saw

The circular saw’s origins are shrouded in myth. Conflicting stories state that it was invented in England, Holland, or Germany, but our favorite story is that of Tabitha Babbitt, an American member of the Shaker religious sect who lived in the early 19th century.

According to legend, Babbitt realized that the two-man saws used by the men in her village were only half as efficient as they could be since they could only cut one direction. Drawing inspiration from her spinning wheel, she connected a foot pedal to a circular blade, allowing it to spin continuously without needing to be reset. Later, sawmill owners implemented Babbitt’s design on a much larger scale.

It’s no surprise that so many people may have had the same idea for the circular saw around the same time. It’s so good at its job that the design we use nowadays isn’t that different from what Tabitha Babbitt drew up 200 years ago.

Modern circular saws are portable, handheld tools powered by either an extension cord or a rechargeable battery. They’re able to make straight cuts for long distances in just about any material. Blades are usually tipped with industrial diamond, with a regulation depth of 7¼ inches, and anywhere from 20 to 80 teeth.

Circular saws can make all the same cuts as a miter saw, plus one: rip cuts. Many professionals prefer to use a track saw or table saw for precision rips, but when you’re out on a job site or simply don’t own a table saw that’s tricked out with rip fences, your next choice is the circular saw.

Rip cuts are made down the length of a board, usually a fair distance from the leading edges. In order to make steady rip cuts with a circular saw, you may want to invest in some rail guides.

A circular saw is almost 100 percent portable. Almost all models weigh less than 8 pounds. Even if it’s corded, you can easily carry it to any part of a job site — all you have to do is plug the cord into an outlet.

Circular saws can handle many different kinds of cuts. If you have a few blades with a good range of tooth counts and sizes, you can make rip cuts and crosscuts with ease. Bevel cuts are also on the table if the saw has an adjustable metal foot. Some blades can even cut things other than wood, like sheet metal or plastic.

Circular saws can only cut straight lines. The way they’re designed, with a wide, flat cutting plane means they can’t curve precisely, and they aren’t great at stopping exactly where you need to cut a sharp angle. The time to use a circular saw is when you need to cut straight through to the other side of something.

Circular saws are also rougher and less precise. They’re machetes, not scalpels. Not only are they more likely to leave ragged edges in wood — especially when crosscutting — but they’ve got a high amount of kickback that makes them less safe.

SEE ALSO: Our reviews of the best circular saws in 2020

When some Tabitha Babbitt or Ed Niehaus of the future invents one saw that can do every kind of cut perfectly, we’ll be first in line to buy it. For now, though, there’s no clear “winner” between circular saws and miter saws.

In general, we recommend a miter saw if you have to do a lot of crosscuts, and a circular saw for a lot of rip cuts. You should probably have a circular saw in your workshop before a miter saw, given its increased versatility, and then add a miter saw when you’re more sure of the kind of projects you like to take on.

Whether you opt for the generalist tool, the specialist tool, or both, one thing nobody can deny is that it’s an awesome time to be a woodworker. Seriously, trying to build a mantel with an old-time one-way Shaker pit saw? No thanks.

Aluminum vs Steel Floor Jack: Which to Choose?

Floor jacks are generally made from steel, aluminum, or a combination of the two. So, which one do you need? The idea that there could